Honeycomb was the fourth of the family to come to life. She stays true to the ethos of the smockworks and features beautiful honeycomb smocking and a square shape smock silhouette for easy to wear volume.  Here are five of Honycombs’ best features:

We chose not to add a facing to the reverse of the honeycomb smocking but to leave the texture it creates exposed in all her beauty. Internal seams are bound using either the contrast print Japanese fabric or the same denim used in the dress. As good  on the inside as the outside. See Honeycomb inside out on two of the images below.

Named after her key feature, Honeycomb smocking is beautifully shaped over the front and back of the dress giving a flattering silhouette and signature style. The smocking is marked out by hand and then smocked by one of our highly skilled smockworkers using a machine. The honeycomb pattern in the denim gives a really tactile texture and is something you just can’t keep your eyes off. We had to be careful of the weight as the honeycomb smocking uses double the width of fabric.

Honeycombs’ inner placket which you might catch a glimpse of now and again. This cotton fabric is from the same Japanese Mill as the denim and is just stunning. The deep indigo and white contrasts beautifully with the sky blue denim and the pale wood buttons.  You can see the gentle curve of the inner placket at the top adding a lovely flow. You’ll also find contrast print on the collar stand, inside the cuff and inside the pockets.

Twin stitching top stitch is used on the pockets in a light taupe colour. It’s a gentle contrast with the pale denim and doesn’t detract from the beauty of the smocking. Top stitching can also be found along the front placket and around the cuff.

Honeycomb has a gentle gather below the smocking and the sky blue Japanese denim lends a beautiful drape and soft handfeel. She also comes in the dark denim, which is slightly more rigid but lends itself equally well to her style.

See Honeycomb in our store here. 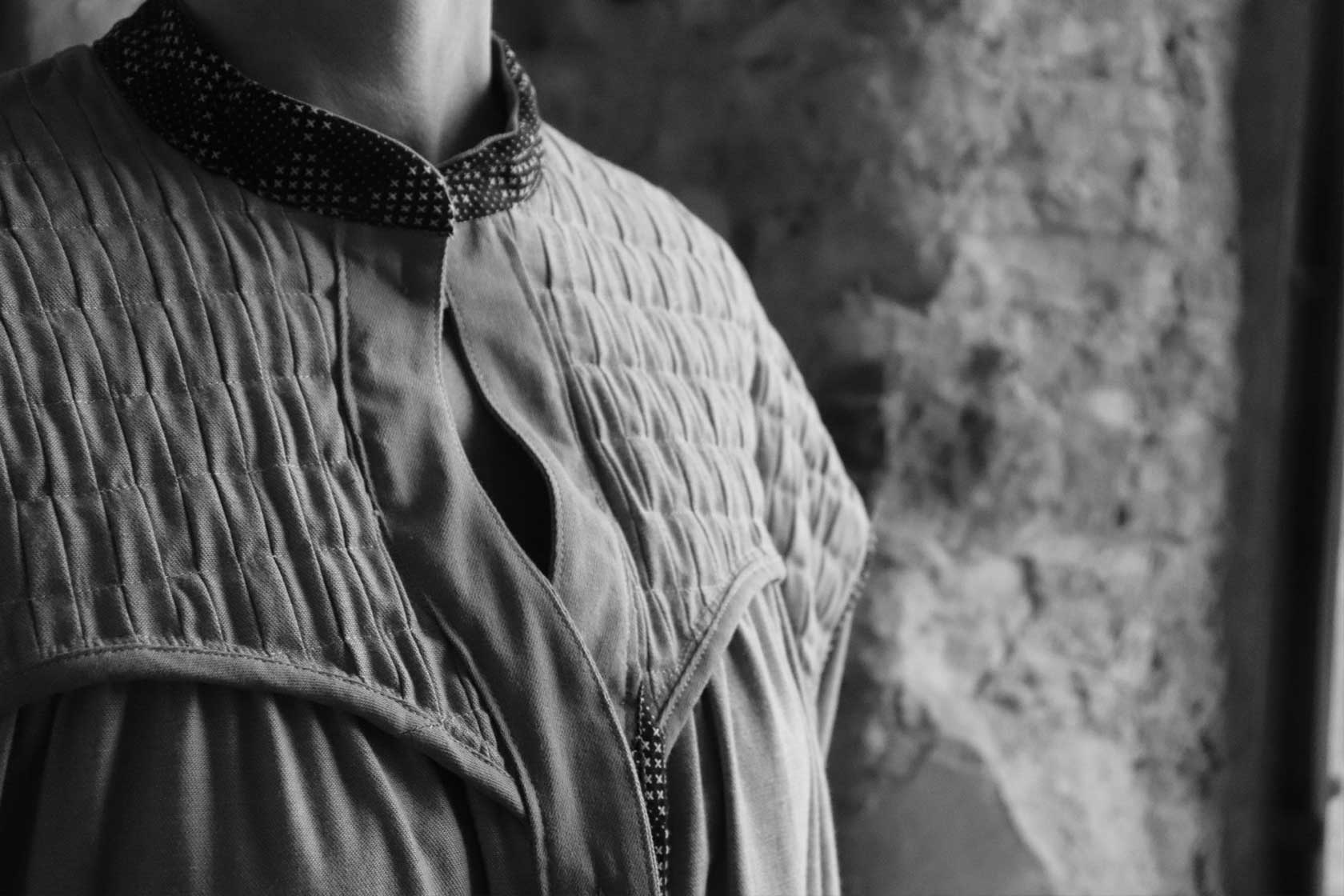 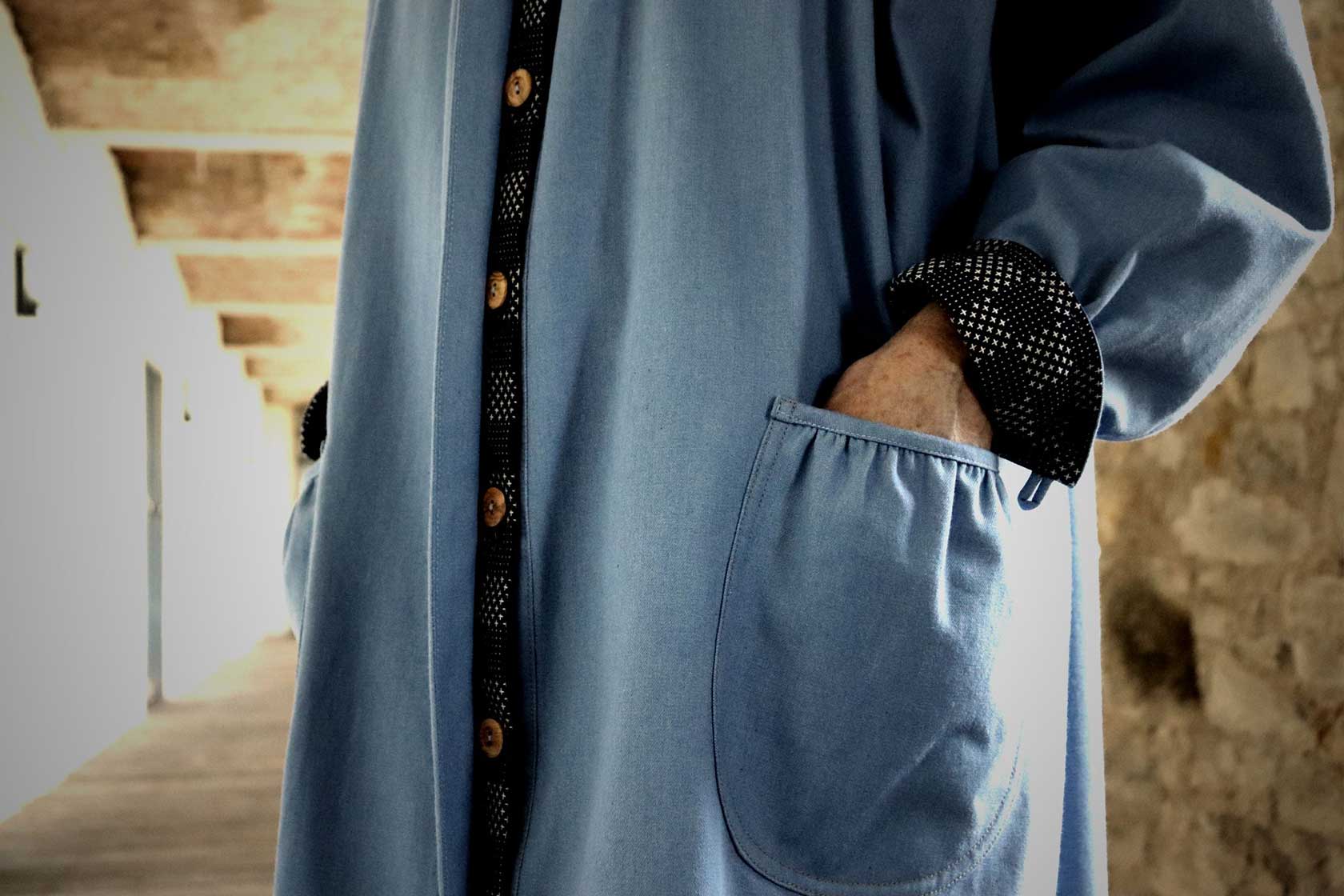 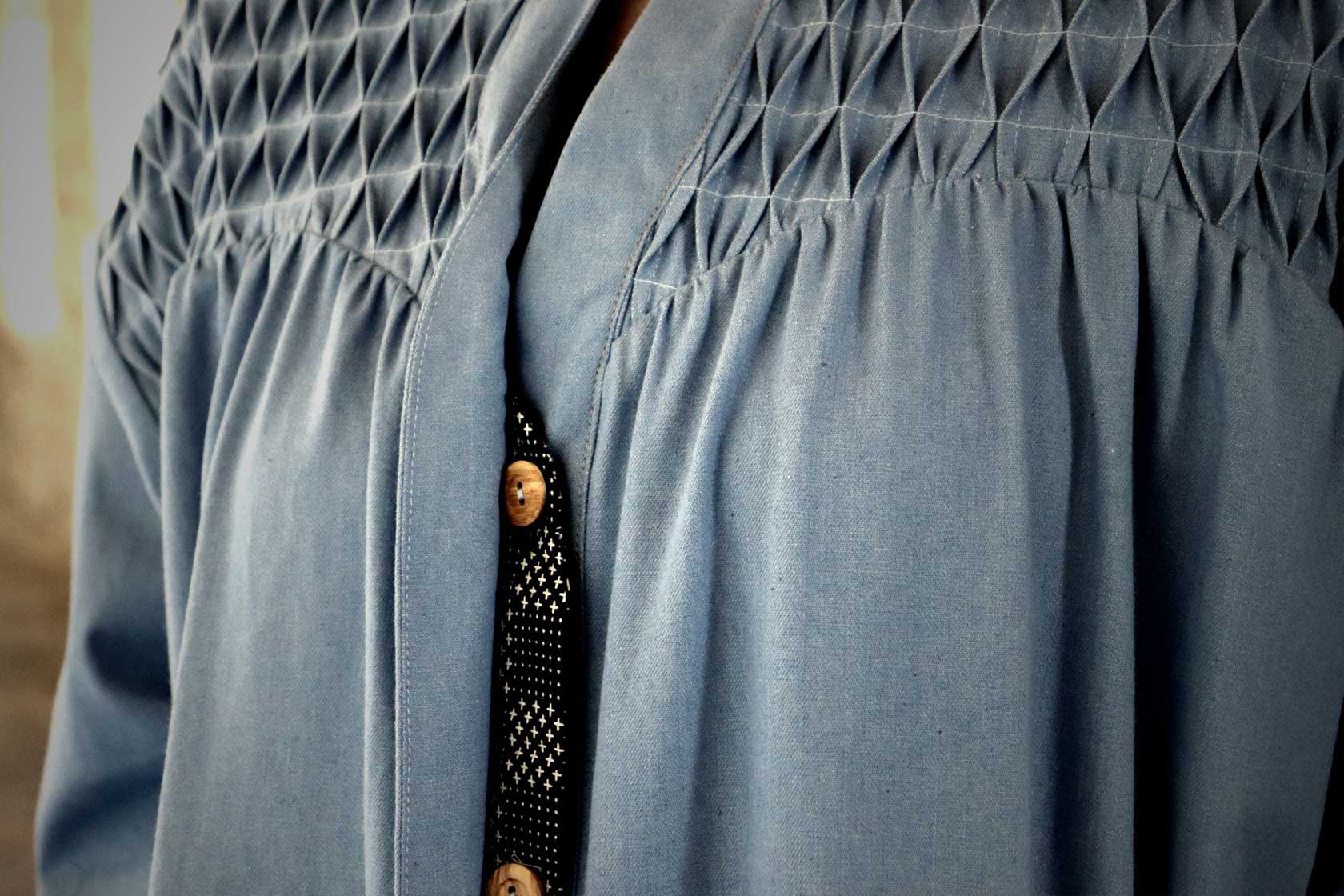 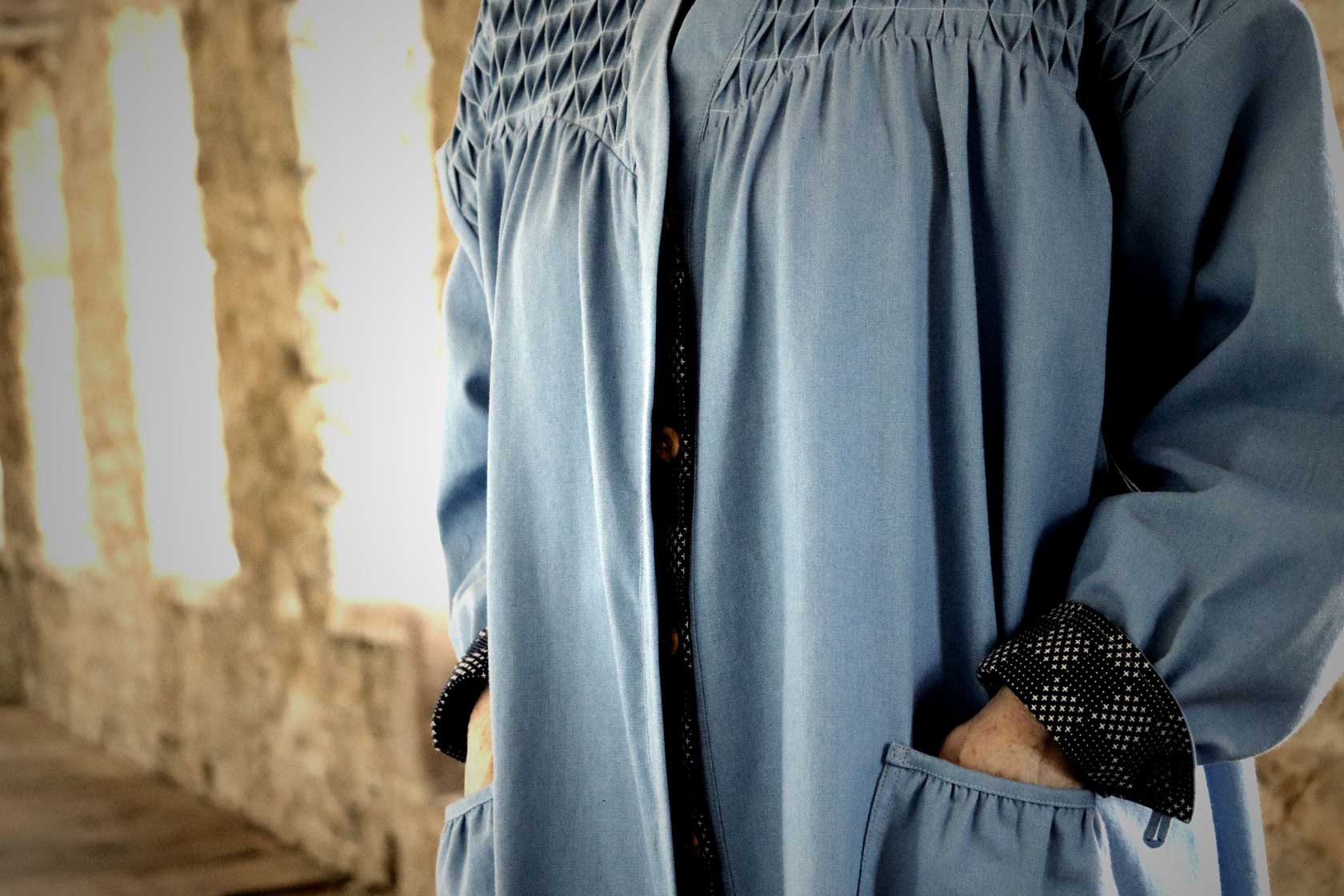 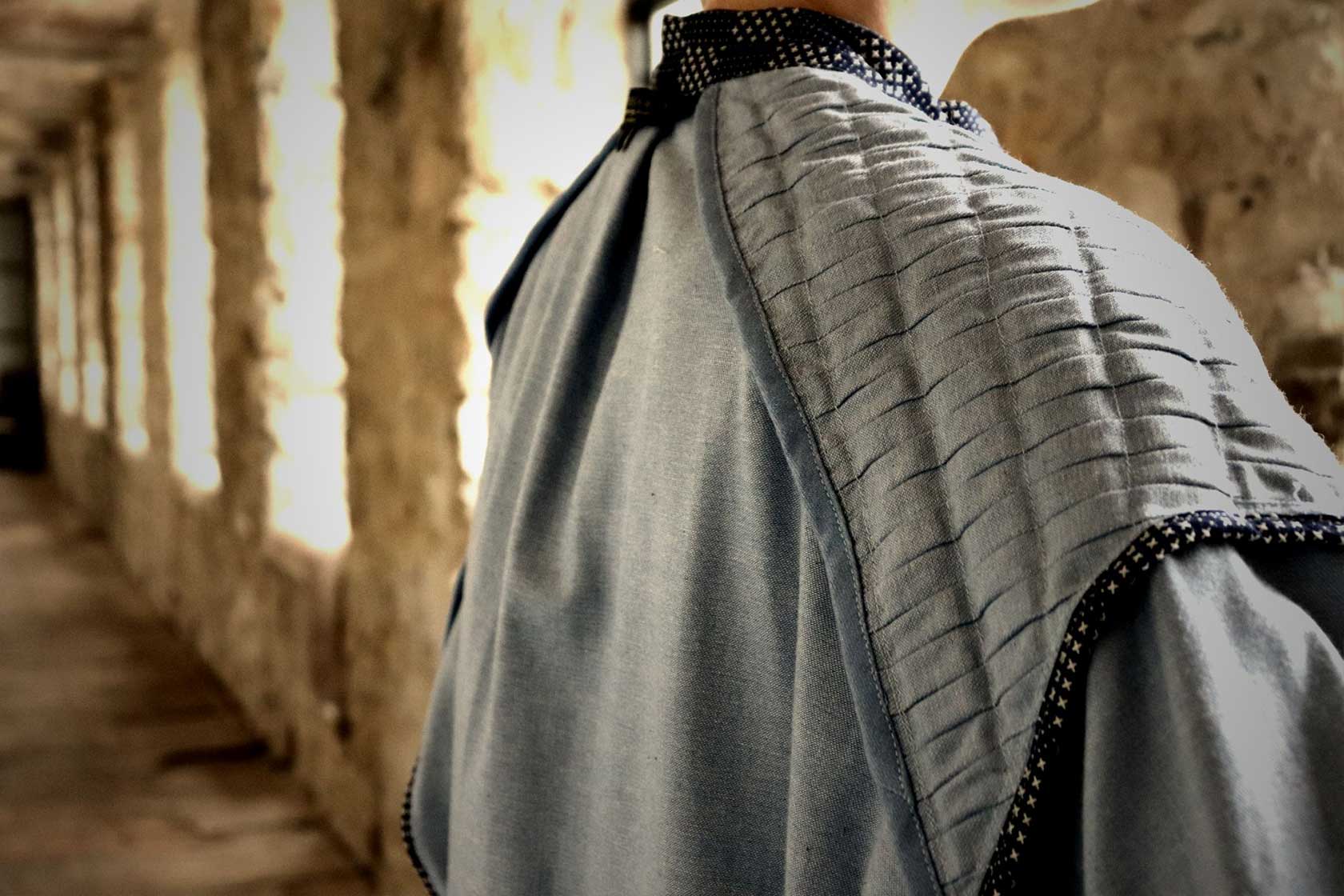